But tenets at the heart of religion can be tested scientifically. This in itself makes some religious bureaucrats and believers wary of science. Is the Eucharist, as the Church teaches, in fact and not just as productive metaphor, the flesh of Jesus Christ, or is it, chemically, microscopically and in other ways, just a wafer handed to you by a priest? Will the world be destroyed at the end of the 52-year Venus cycle unless humans are sacrificed to the g o d s ? Does the occasional uncircumcised Jewish man fare worse than his co-religionists who abide by the ancient covenant in which God demands a piece of foreskin from every male worshipper? Are there humans populating innumerable other planets, as the Latter Day Saints teach? Were whites created from blacks by a mad scientist, as the Nation of Islam asserts? Would the Sun indeed not rise if the Hindu sacrificial rite is omitted (as we are assured would be the case in the Satapatha Brahmana)?

I don't know anything about the Eucharist or the Hindu sacrificial rite beyond what Wikipedia can tell me. Circumcision, however I do know. Judaeus sum, judaici nihil a me alienium puto, as Shadal said. And that's how I know that Carl got it wrong. As far as I know, circumcision is not supposed to make the circumcised fare better in life. He would have had a bone to pick with mezuzot, or better yet, amulets themselves. But circumcision? Where did he get that from?

And if he didn't do his homework on this one, can I still rely on what he says about the others?
Posted at 11:27 AM 2 comments:
Email ThisBlogThis!Share to TwitterShare to FacebookShare to Pinterest

Here's a snippet of a conversation that Rav Yaakov Chizkiah Greenwald of Pupa had with Rav Aaron Teitelbaum of Satmar, as it's recorded here
. 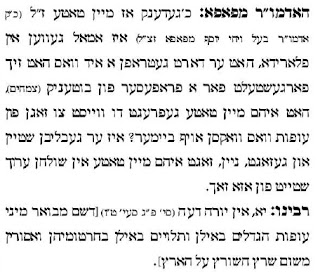 trans.: The Pupa Rebbe: I remember my father OBM was once in Florida, he met there a Jew who presented himself as a professor of botany. So my father asked him do you know anything about birds that grow on trees? so he stood still and answered no. So my father told him that in Shulhan Arukh such a creature is discussed.

And then the conversation turned to something else.
Posted at 7:00 PM 6 comments:
Email ThisBlogThis!Share to TwitterShare to FacebookShare to Pinterest
Newer Posts Older Posts Home
Subscribe to: Posts (Atom)