The Enigma of the Maklos - part II

In yesterday's post, I provided three approaches to the enigma of the Maklos. One was that of Rabbi Samson Raphael Hirsch, the second one was that of MakeForYourself, and the third was that of Dr. Blonder as quoted by Shadal. At the end of the post I linked to R. Josh Waxman's post where he analyzes Shadal's words. In this post I would like to present R. Josh's own pshat. But first, a minor digression. I wrote yesterday "is it really true that observable inheritance was disproved? Nowadays I think there is no doubt that it is not true." Well, here is a scan of Rabbi Zamir Kohen's book "The Coming Revolution" which pays no heed to the fact that Maternal Impression has long been disproved. There is also a Hebrew version which i can upload at readers request. 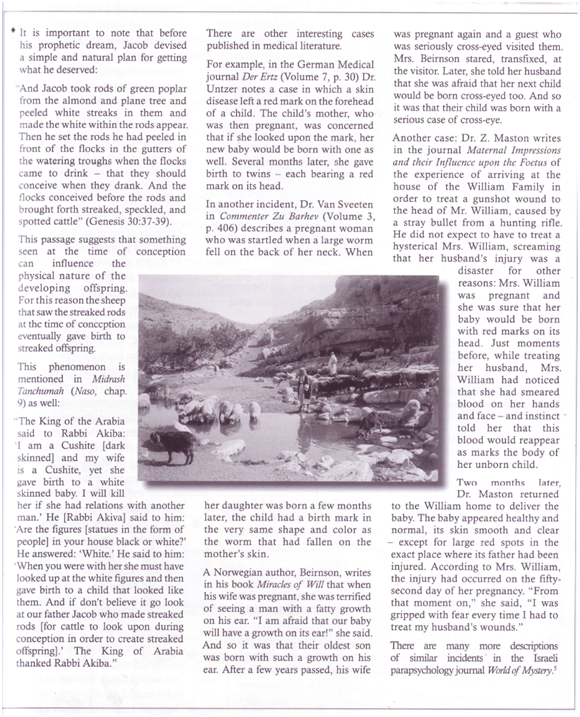 Now I turn to R. Josh's pshat. Here are his words:

I think that the most straightforward reading of the Torah text is that Yaakov believed that the particulars of the striping on sticks would cause the patterns on the sheep. This impact of the imaginative faculties was believes in ancient times and was believed by Chazal. It certainly could have been believed by Yaakov Avinu.

Another conclusion could be somewhat multivalent. Recall that Yaakov's dream indicates some Divine influence on the outcome of the sheep patterns. We could say that Yaakov did his hishtadlus, in accordance with the beliefs of his time; and then, Hashem helped things along, in determining which seed was selected.

The first part of his pshat is the same as Rav Hirsch's. The second part where he states that the sheep patterns were influenced by a miracle, is that of Rabbi MakeForYourself. An interesting mixture, that fits the pshat very well.


What I don't understand is, why can't we just say- as I proposed in part I - that the cause of the pattern change in the newborns were Mendelian inheritance Law's? Actually, Mendelian Inheritance fits the verses depicting the dream just as well as the miracle proposed by R. Josh.

Posted at 8:00 AM
Email ThisBlogThis!Share to TwitterShare to FacebookShare to Pinterest